The first task for my gsoc project was to implement a CI/CD pipeline with Jenkins for CloudCV/Origami, I have been working on it for the last couple of days and I have managed to get the background work done. This blog post is sort of a guide for how to set up a CI/CD pipeline using Jenkins and what are the gotchas in it.

To get jenkins up and running on your system install docker and pull the jenkins image from docker hub using docker pull jenkins/jenkins:lts. The docker image _/jenkins has been deprecated so use the provided command instead.

To run jenkins in a container instance using docker use docker run -p 8080:8080 -p 50000:50000 -v {path/to/jenkins/volume} jenkins/jenkins. Binding the mount in a volume helps to backup jenkins data and configuration, so next time you spin up a jenkins container you don’t have to worry about configuring it from scratch and can directly get it running is it was before.

On running jenkins in a container a bunch of things will bootstrap and you will see the output on your screen. Jenkins docker setup uses a tool tini to help manage the zombie processes created. Here is a nice answer about why should one care about these zombie processes and how tini help resolve this problem, I myself found this very intersting so just wanted to share.

Building a CI/CD pipeline with Jenkins⌗

Building a CI/CD pipeline is quite easy with all the plugins that jenkins provide. On the Jenkins user dashboard click on New Item option which will take you to a screen to select the type of project you want to work on using jenkins. Let’s look at Multibranch pipeline for example which creates a set of pipeline projects according to detected branches in one SCM repository. Rest all types are also similar and can be worked out easily.

For the next step you will be taken to the Pipeline configuration page. Fill out basic details about the pipline such as name, description etc.

In the branch sources dropdown select the remote SCM you want to build the pipeline with, for example Github.

The usersname field corresponds to user who have access to the repository and password is the Github Personal Access Token. So create the above mentioned global credentials and add them to branch sources in configuration pipeline. 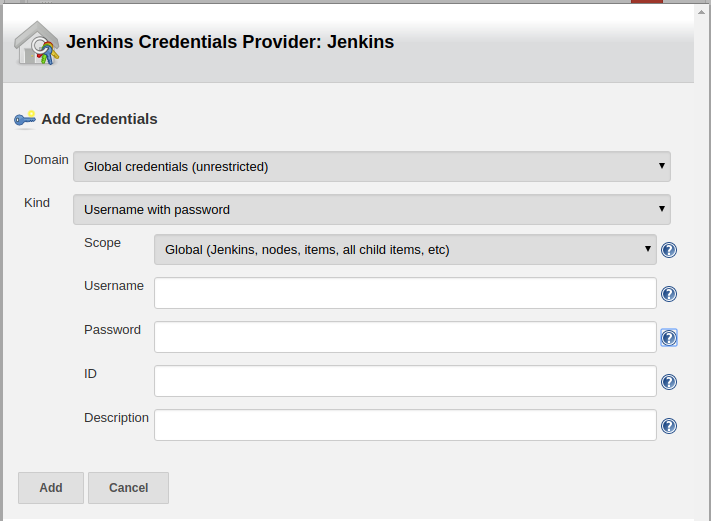 You can also choose from the branches which should be kept track of by Jenkins by adding a behaviour(Filter by name regexs) to Branch source. To add more behaviours for your branches click on the add button in the Branch Source » Behaviours section. 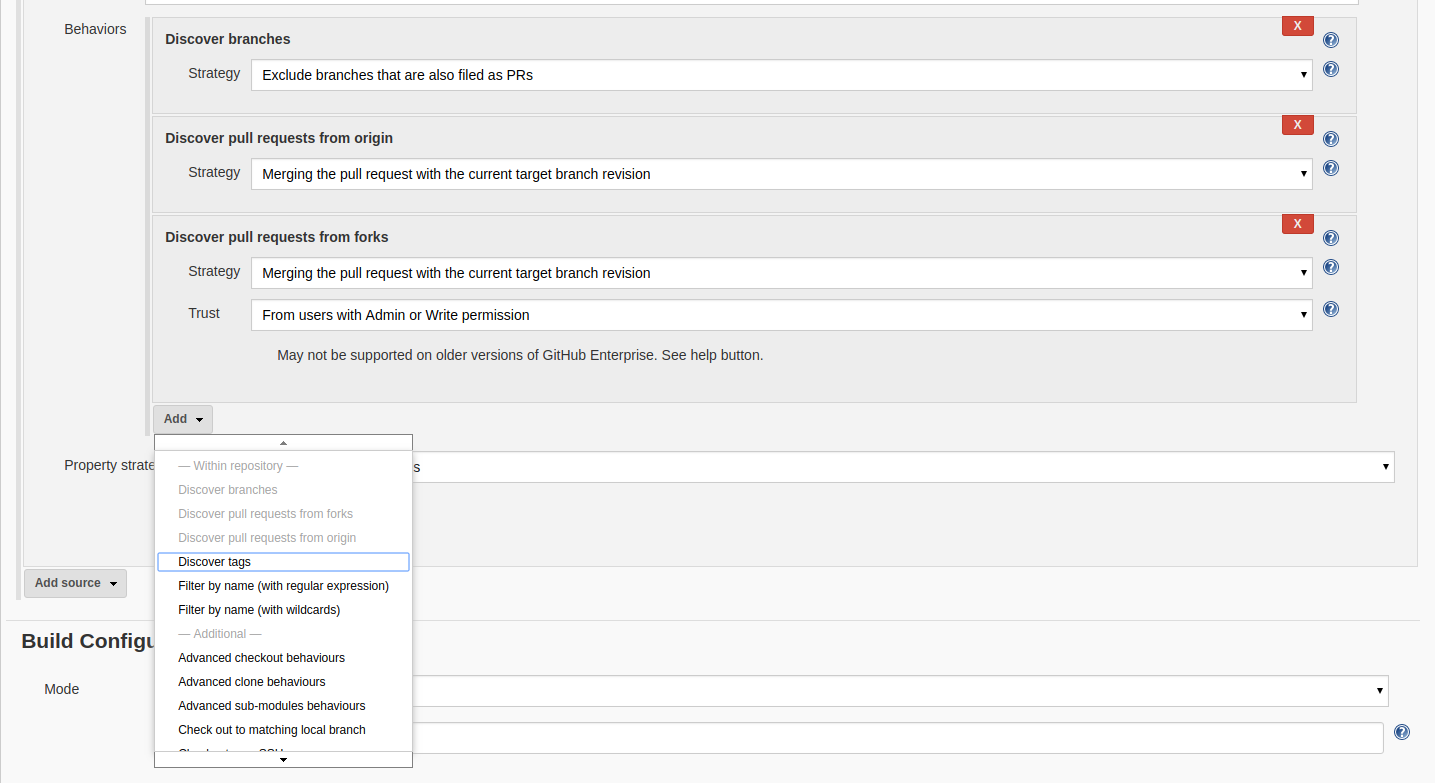 For example if I want to keep track of two branches in my repository master develop then I add the behaviour ‘Filter by regexs’ and add the following regex master|develop.

In the build configuration section, select Jenkinsfile with the required script path of the Jenkinsfile in your repository. Jenkinsfile for jenkins is like Dockerfile for docker where it specifies the behaviour of the pipeline to be run on the build. In this file you specify the entire pipeline. Jenkinsfile provide methods/syntax for this purpose

I will focus on it more a while later when it comes to actually writing the Jenkinsfile.

Save the configuration and we are ready with the pipeline infrastructure. One thing we haven’t done so far is connect jenkins to Github. Jenkins provide a neat way to integrate with the github webhooks which can the used to trigger the pipeline build.

To configure github webhooks go to Manage Jenkins » Configure System and scroll down to Github section. You can configure github server and webhooks here. To know the webhook url or to override it click advanced options. Configure the settings and add credentials to access github servers like done earlier and save. The options available for credentials is Secret Text so add a new credential with secret text as the personal access token of the user.

To register a webhook we need to configure the github repository settings. Go to repository settings and navigate to webhooks section. Add webhook for Jenkins with the Payload Url as overridden above or default https://{JenkinsServerUrl}/github-webhook/. Select the type of event you want to trigger the webhooks for. Like if you want to build the pipeline for a pust to repository or on a pull request select those options from Let me select individual events section and create the webhook. 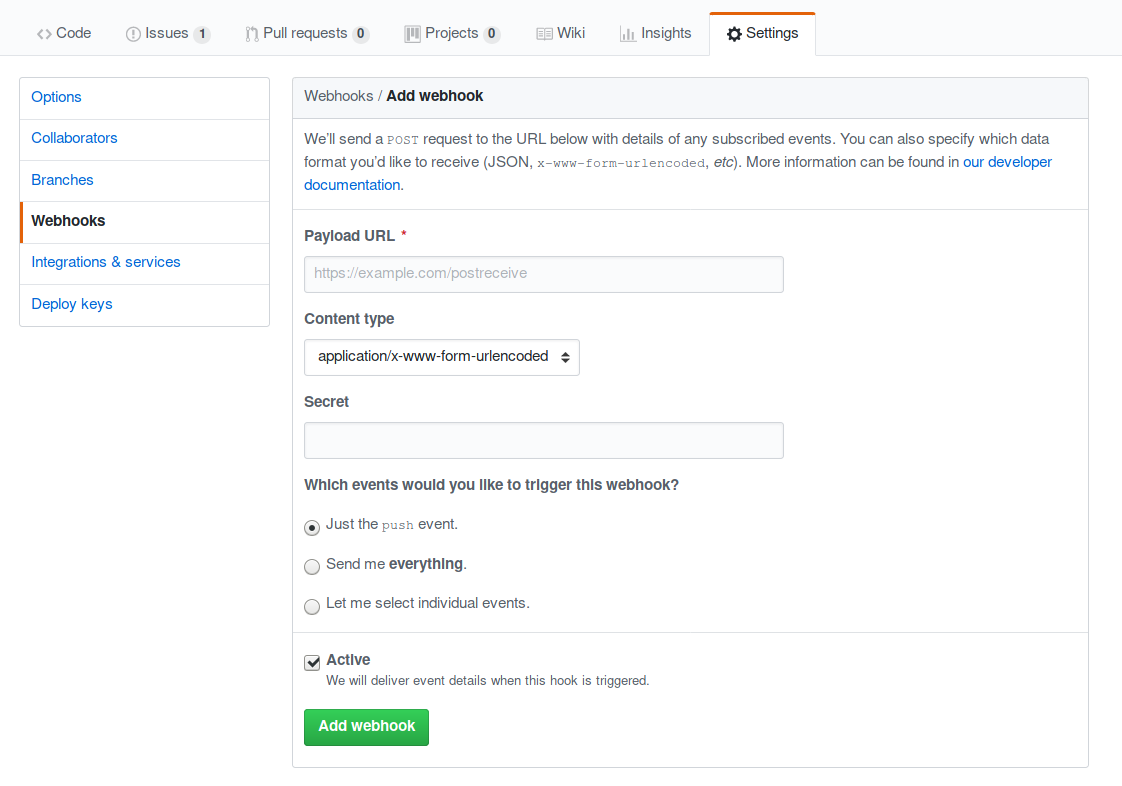 You should definitely consider checking out blueocean plugin for Jenkins, it provides a nice dashboard to visualize your Pipeline and Builds.

Now our Jenkins Continuous delivery pipeline is ready to roll!.

Still we haven’t worked on our Jenkinsfile to define the actual pipeline. A great documentation for the same is available here. Again I would recommend you to use pipeline syntax over scripted pipelines for better handling and less gotchas.

Let’s talk a little bit about Jenkinsfile and pipeline syntax. Each pipeline begin with a pipeline block which defines the acutal model for CD. A pipeline consists of many stages like testing building and deploying each of these stages are executed by a node and have various steps which defines a single task to be carried out in a stage. So the hierarchy here is Pipeline » Node » Stage » Step.

This hierarchy is clearly depicted by the declarative pipeline in Jenkinsfile.

Jenkins have great bindings with docker and can easily manage execution environment using docker. The agents section in Jenkinsfile pipeline defines the agent/node we will use for our build process, possible values are

Now you are good to go with docker agent.

It might happen that you will get the following error in your Jenkins build Got permission denied while trying to connect to the Docker daemon socket at unix:///var/run/docker.sock

To solve this get a bash shell with root user in your container and change the group of /var/run/docker.sock to docker using chgrp docker docker.sock.

I have created a Dockerfile for the same to add docker support using mounting the host docker engine on jenkins docker container. It can be found here. Follow the steps mentioned to set things up.